Mr Bleich is the Chair of the Fulbright Foreign Scholarship Board, by appointment of former-President Barack Obama, and also serves as a Director of the East-West Center Board by appointment former Secretary of State John Kerry. He leads the international consulting group, Dentons Diplomatic Solutions, and is a Partner in Dentons US LLP.  His work specialises in resolving complex cross-border disputes, data and security issues, and the Asia-Pacific Region. He has been honoured as a California Lawyer Attorney of the Year, and listed in Lawdragon 500 and in America's Best Lawyers as a top “Bet the Company” lawyer. Mr Bleich has also taught several courses at UC Berkeley School of Law, and publishes extensively.

Mr Bleich previously served as Special Counsel to President Obama from March-September 2009 before being appointed by the President to serve as the 24th United States Ambassador to Australia. As Ambassador, Mr Bleich’s term was marked by the US rebalance to the Asia-Pacific, with Australia being the focal point for that shift. His efforts included overseeing record growth in trade and investment between the United States and Australia, bringing the Defense Trade Cooperation Treaty into force, establishing new alliance agreements for satellites and cyber security, executing a new space cooperation agreement that supported the Mars Curiosity rover landing, leading joint US-Australia efforts in Afghanistan’s Uruzgan province, and promoting regional human rights efforts. For his federal service, Mr Bleich has received numerous awards, including the highest civilian honour awarded by the Director of National Intelligence: the Distinguished Service Medal. In 2013, he received the State Department's highest award for a non-career ambassador, the Sue Cobb Prize for Exemplary Diplomatic Service.

In addition to his professional practice and federal service, Mr Bleich has served the State of California overseeing the nation’s largest higher education system as Chair of the California State University Board of Trustees (2008-09), and the nation’s largest bar association, as President of the California State Bar (2007-08). Mr Bleich has also served as President of the Bar Association of San Francisco (2002-2003) and Chair of the ABA’s Amicus Curiae Committee (2008-09), as well as chair or president of several other non-profit legal organisations. From 1998-1999, he served as Director of the White House Commission on Youth Violence following the tragic Columbine shootings.

Prior to entering private practice, Mr Bleich clerked for Chief Justice William H. Rehnquist of the US Supreme Court, Judge Abner J. Mikva of the US Court of Appeals for the DC Circuit and Judge Howard M. Holtzmann of the Iran-US Claims Tribunal at The Hague.

Mr Bleich has been elected as a life member to both the American Law Institute and the Council on Foreign Relations. He also serves on the board of several non-profit and private boards.  In 2009, the City of San Francisco named a day in his honour. 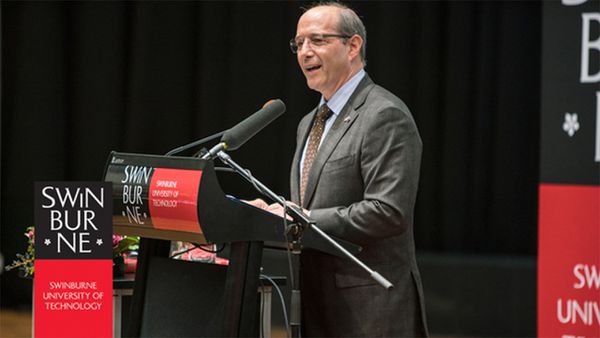 Good evening. It is great to be back at Swinburne University. I'm honoured to deliver this year's Chancellor's Oration, and I'm grateful to... Former ambassador Jeffrey Bleich speaks on Trump, disruptive technology, and the role of education in a changing economy

In praise of American and Australian global citizens

Last week was the 65th anniversary of the American Australian Association, one of the partner organisations that founded the US Studies Centre and the Perth USAsia Centre. US ambassador to Australia...

Australian politicians have heavily criticised American technology giants Microsoft and Google for their low rate of taxation paid locally. Visiting professor Jeffrey Bleich says he is not surprised to see the US...

Lunch with former US Ambassador to Australia the Hon. Jeffrey Bleich

Former US Ambassador to Australia the Honourable Jeffrey Bleich discussed the current state of American politics and US foreign policy at a lunch attended by former prime ministers of Australia Bob Hawke AC...

Fresh from President Obama’s Cyber Security Summit at Stanford University, former US Ambassador to Australia, Jeff Bleich, discussed the security and privacy challenges facing internet users, and how the United States plans to...

Selected Centre students were invited to participate in a roundtable discussion with The Honourable Jeffrey Bleich, former US ambassador to Australia and visiting professor at the US Studies Centre.

The roundtable was held...

The coming technology revolutions in Asia from Silicon Valley

In this public forum The Honourable Jeffrey Bleich, former US Ambassador to Australia, talked about how the rising middle classes in Asia have the opportunity to take advantage of certain new disruptive technologies that...