It was a Republican win in a deep Republican state. Trump in 2016 and Mitt Romney in 2012 both carried North Carolina by 12 points. In 2018, the Republican won NC-9 with 58 per cent of the vote. On Tuesday, the Republican prevailed with 51.5 per cent.

A loss would have set off a seismic quake running from Charlotte to the Oval Office and under Capitol Hill. Trump won this battle. There is no doubt that his election eve rally in Fayetteville and the vice president’s work earlier that same day in the electorate paid off.

The base held – and turned out.

For Trump, this will reinforce the strategy he has embraced from day one of his presidency: to govern by locking in his base and then getting them to the polls. To energise his true believers with the hot button issues of immigration, "America First", nativism, protectionism, rebuilding the military, and the evocation of the “great America again” pastoral.

“Your way of life is under assault by these people,” Trump told his rally. “Tomorrow is your chance to send a message to the America -hating left.” It did not matter that the Democratic candidate is a Marine and Iraq veteran. 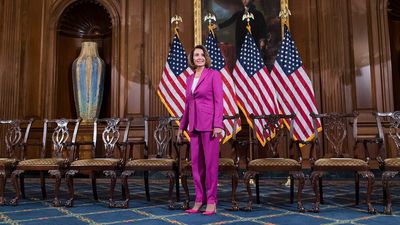 The House is in session: Key committees in the 116th Congress

While a win is a win is a win – just as it was with the electoral college for Trump in 2016 – the result in this by-election is a harbinger not of Republican resurgence, but a continued consolidation of the strength Democrats showed in winning the House of Representatives in 2018. An 80 per cent cut in the Republican margin in a solid Republican district does not presage Republican gains in House races next year. For this reason, Democrats’ hopes were dashed – but were not crushed.

Fifteen Republicans have announced their retirement so far this year. Five are in seats with Republican margins of under 8 per cent. Five are in Texas alone.

The latest polls show a slump in Trump’s approval, from 45 per cent to 40 per cent, and an approval rating on the economy of under 50 per cent. Concerns about the costs of the trade war with China, fear of a recession, and frustration over the lack of progress in curbing gun violence have taken a toll over the past month. Trump can certainly reverse these trends and strengthen his position – especially if China is resolved.

Trump believes the force is with him. He declares preferences for Republican candidates in primaries – and they win. He campaigns in tough races like NC-9 – and the Republican wins. Trump wins.

Trump will not change his strategy one bit. He will continue to shore up and unleash the voting power of his base, so that his supporters will outvote the “Democrat socialists” he demonises at every opportunity.

Trump goes into 2020 believing he has the measure of his opponents. And will win. Democrats believe they will indeed hold the House, but the Senate and the presidency are not assured at all.