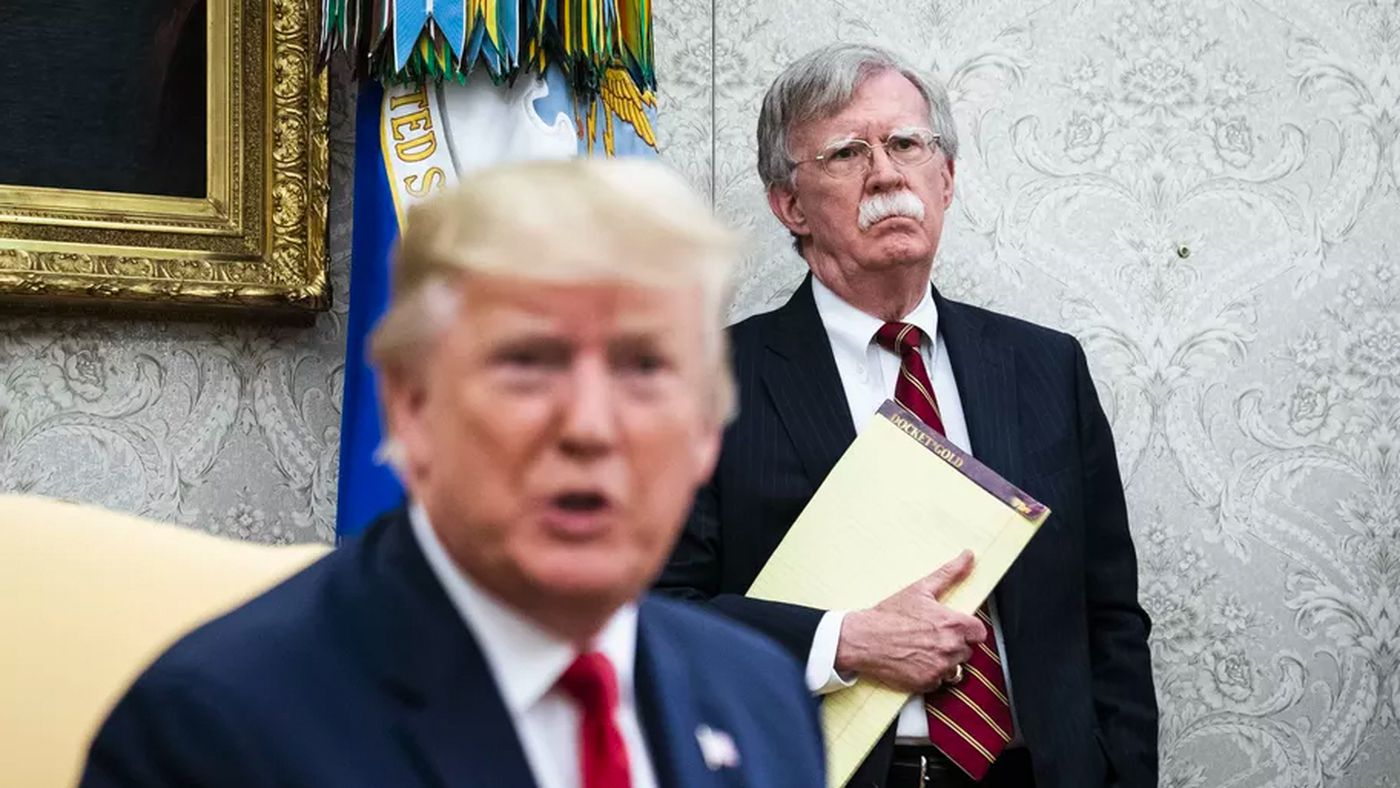 There is a time-honoured American expression that accurately describes John Bolton’s reflections on his 2018-19 tenure as President Donald Trump’s national security adviser: “It’s difficult to soar like an eagle when you have to work with turkeys.”

Bolton’s memoir, The Room Where It Happened, might be described as a turkey shoot, as he attacks fellow cabinet ministers ranging from former UN ambassador Nikki Haley and former defence secretary Jim Mattis to incumbent Secretary of State Mike Pompeo and Treasury Secretary Steven Mnuchin.

Few escape the acid in Bolton’s pen, which has been sharpened by copious note-taking during his time close to the Trump Oval Office. Vice-President Mike Pence seems the exception.

Trump has dismissed The Room Where It Happened as a work of fiction, which is curious given his administration challenged the book’s publication on the grounds of breaches of national security.

Trump has dismissed The Room Where It Happened as a work of fiction, which is curious given his administration challenged the book’s publication on the grounds of breaches of national security. The President has been reported to have ridiculed Bolton as “washed up” or a “wacko”.

Bolton is a lifelong Republican, an abrasive hawk who served in various Republican administrations dating back to Ronald Reagan and including a stint as US ambassador to the UN for George W. Bush. This is a particularly sensitive feature of Bolton’s resume, given Trump regularly attacks the 43rd president as savagely as he does the 44th (Barack Obama).

Bolton positioned himself for senior office in the Trump administration. It is obvious that his first objective was to be secretary of state, where initially he lost out to Rex Tillerson. But he stays the course in blind ambition. The opening of the book is almost a parody of hard-boiled American writer James M. Cain. Does the President actually tweet twice? He does, and Bolton finds himself back in an influential role.

If Bolton appears to have few friends among his Republican peers, he has fewer friends on the other side of the aisle, where he is often loathed. Congressman Adam Schiff (Democrat, California), who led the impeachment proceedings against Trump, once described Bolton as an author but not a patriot. This is a direct reference to Bolton’s failure to testify during the impeachment proceedings, not only about knowledge of the Trump telephone call with President Volodymyr Zelensky of Ukraine but also pleading with President Xi Jinping about what China might do to assist Trump’s re-election.

As Bob Woodward (in his book Fear) and Carol D. Leonnig and Philip Rucker (in their book A Very Stable Genius) attest, the Trump administration is dysfunctional. Even funerals bring needless controversy, exemplified by the arguments about who would attend memorials for former president George HW Bush and senator John McCain. “During the controversy over McCain’s funeral,” Bolton writes,

Trump tweeted that White House counsel Don McGahn was leaving at the end of the Brett Kavanaugh confirmation battle. Although McGahn had often joked to me “We’re only one tweet away”, this was a classic example of Trump’s announcing something already decided without giving McGahn a chance to announce it first.

McGahn’s sin? He was too candid with Robert Mueller’s investigation. Is it any wonder, then, that George W. Bush tells visitors to his office in Dallas that he thinks the President is great because Trump makes Bush look like George Washington?

The US National Security Council was formed in 1947 by president Harry Truman. The first national security adviser took office in the Eisenhower administration in 1953. The job is to counsel the president on security matters both foreign and domestic. Through the years, distinguished Americans such as McGeorge Bundy, Henry Kissinger, Zbigniew Brzezinski and Brent Scowcroft have occupied the role.

But the Truman Doctrine, essentially based on George F. Kennan’s long telegram from the US embassy in Moscow in 1946, afforded the US an overarching strategic philosophy on which its foreign and defence policy might be based.

Trump has little respect for democratic allies and unlike official US national security strategy, as devised by former defence secretary Mattis, allies are seen as having little value and routinely are regarded by the President as freeloaders on the American taxpayer.

Initially this provided the framework for containment of Soviet aggression. The doctrine routinely was refined through the years, as with the Guam (Nixon) Doctrine of 1969.

No such Trump Doctrine exists, nor is one likely to emerge. If Trump’s presidency may reasonably be described as transactional, then US foreign policy is evermore based on the trading floor.

However, Trump is no broker, despite claims in The Art of the Deal (largely written by Tony Schwartz of New York magazine). Bolton underlines the haphazard nature of Trump policymaking in excruciating detail.

Trump has little respect for democratic allies and unlike official US national security strategy, as devised by former defence secretary Mattis, allies are seen as having little value and routinely are regarded by the President as freeloaders on the American taxpayer.

There is actually some truth in this position, as presidents Bush Jr and Obama argued with respect to certain European allies, especially Germany. But under the current administration a NATO summit almost sees the collapse of the organisation as Trump berates his partners. At breakfast in Brussels with NATO Secretary-General Jens Stoltenberg, Trump, having earlier confused the EU with NATO, decries the value of the alliance, as Bolton records:

On Trump rolled, asking why we should enter World War III on behalf of some country not paying its dues, like Macedonia, which he then acknowledged didn’t bother him as much as Germany, a wealthy country not paying enough. He complained about his own advisors saying we didn’t understand the problem even though he told us the truth. Trump clearly believed that the only way the allies would spend more is if they thought the United States was leaving, which didn’t bother him, because he didn’t think NATO was good for America.

However, the President has a more accommodating view when dealing with dictators, who understand this instinctively and play the great negotiator off a break. China’s Xi tells Trump by phone, according to Bolton, that he would like to see the limiting 22nd amendment to the US constitution repealed, so that Trump could continue to serve indefinitely as President. Trump’s fawning over the general secretary of the Chinese Communist Party induces nausea. Bolton reports from the Trump-Xi dinner in Buenos Aires at the G20 in 2018:

Xi began by telling Trump how wonderful he was, laying it on thick. Xi read steadily through notecards, doubtless all of it hashed out arduously in advanced planning for this summit. For us, the President ad-libbed with no one on the US side knowing what he would say from one minute to the next. One highlight came when Xi said he wanted to work with Trump for six more years, and Trump replied that people were saying that the two-term constitutional limit on Presidents should be repealed for him. I was aware of no such chatter.

Vladimir Putin is similarly seductive in dealing with Trump. Robert Gates, defence secretary in the George W. Bush and Obama administrations, said of a meeting with the Russian leader that he looked into the eyes of a “stone-cold killer”. But Trump reads things differently.

As recorded in A Very Stable Genius, Trump dismisses the view of his own secretary of state, Tillerson, which was based on many years of dealing with the Russian leader in the oil industry. Trump has one two-hour meeting with Putin and concludes that he knows better.

The Helsinki Summit was a fiasco, with Trump appearing to concede that Putin’s denial of Russian interference in the 2016 US election was persuasive. The American media exploded.

“This was hardly the way to do relations with Russia, and Putin had to be laughing uproariously at what he had gotten away with in Helsinki,” Bolton writes.

Condi Rice [secretary of state in the Bush 43 administration] called to tell me she was not going to make any public comment on Helsinki, but she said, ‘‘You know, John, that Putin only knows two ways to deal with people, to humiliate them, or dominate them, and you can’t let him get away with it.’’ I agreed.

The Room Where It Happened is unlikely to win a Pulitzer prize and disturb the status of Jack Kennedy’s Profiles in Courage, nor will it rival the memoirs of president Ulysses S. Grant. But it does afford an unfiltered view of the Trump presidency.

This book should be read by a very broad audience but not necessarily by “Never Trumpers”. It should be read by “Trumpeteers” who have boisterously applauded Trump’s journey from Charlottesville, Virginia; through COVID-19 “cures”; to St John’s Episcopal Church, also known as the Church of the Presidents, opposite Lafayette Square in Washington, DC. Bolton will vote for neither former Democratic vice-president Joe Biden nor Trump, but he remains an avowed Republican.

Richard Nixon always maintained that the US did not need a domestic president, but it was essential in foreign and defence policy. He was right. For US allies, the next four years are of critical significance if Trump is re-elected. With liberty in Hong Kong disappearing, Taiwan is the democratic canary in the coalmine of the new cold war. Bolton argues:

After I left the White House, when Trump abandoned the Kurds in Syria, there was speculation about who he might abandon next. Taiwan was right near the top of the list and would probably stay there as long as Trump remained President, not a happy prospect.

Nor is the prospect happy for Trump, in this American summer of toxic Trump biographies. Next up is a lacerating book by his niece, Mary Trump, Too Much and Never Enough: How My Family Created the World’s Most Dangerous Man. She aims to expose core Trump family values. In this light, we might consider Bolton’s effort to be just the opening barrage from the USS New Jersey. Hand-to-hand fighting will begin soon.